Thank you for your interest in our project.

Through the collection of information materials, SolarTec Inside aims at giving insight into Solar Tec’s extraordinary successful development until 7. July 2008 — more than five years after Dr Merkel’s unexplained dismissal as the company’s chairman. 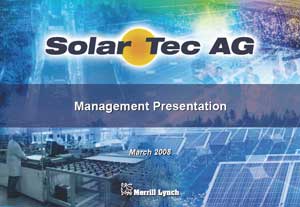 In addition, we will make a first attempt to inform about SolarTec’s subsequent downfall and its successors as well as investment companies.

The company had over 1500 investors that were directly or indirectly involved. These investors made a double digit million euro investment expecting a continued development of the company.

In 2007 and until mid 2008 they could hope for their investments to be very fruitful indeed: The documents collected prove that at this time, Merril Lynch, the leading global investment bank wanted to bring the company to the the stock exchange in Singapore with a value of over EUR 1 billion.

The continuous success of Chinese companies Trina, Yingli and Renesola which were brought to the stock exchange by Merril Lynch the previous year proves that this wasn’t a fantasy. Yingli and Trina are the world’s largest PV manufacturers for years (places 1 and 2 in 2012).

SolarTec’s positive development, illustrated in detail through documents and emails, came to an abrupt end after 7. July 2008.

The chairmen put in place by the board of directors, both of them solicitors, did not have the required industry knowledge nor access to the established network in Asia. More than anything, however, one thing was missing: the trust of the business partners! It was precisely this trust that was the deciding factor in this newly developed industry without defined structures, especially in Asia. Consequently, the most important suppliers refused to work together with the new chairmen.

Two letters from these partners give further insight and are therefore being displayed.

Moreover, they were unable to bring in new orders. The management’s activities were mainly focused on coming up with an explanation of the course of action against CEO Dr. Merkle.

There were no facts that would have justified a decision with such serious consequences.

This becomes clear by the fact that despite the prosecution’s intense investigations including a high number of searches, and the securing of hundreds of files, computers and data on several servers, the proceedings still have not been closed – even five years after Dr Merkle’s dismissal on 7. July 2008.

The alleged displacements of SolarTec’s assets were nothing but empty allegations trying to justify the course of action taken – they never took place. This is proven by neutral reports of several certified accountants. On the contrary: considerable means were given to the SolarTec AG by Bavarian Solar AG.

Only this way it was possible to keep up the liquidity required for the construction of power stations. The alleged embezzlement was therefore never mentioned by the board of directors or the previous chairmen when the charges were pressed. It would have been absurd: Dr. Merkle did not even seek a CEO’s salary. The many investors did not receive any information on the status of the proceedings, except for a brief and – from today’s perspective – false explanation from the liquidator in January 2009. Instead, the “rumour mill is buzzing”.

Under the new management, the SolarTec AG had to file for bankruptcy by the end of December 2008, i.e. only six months after Dr. Merkle’s dismissal. Dr. Merkle was also allegedly responsible for this bankruptcy. However, there is no evidence to support this allegation. On the contrary. Dr. Merkle tried through gratuitous transfer of his shares and the payment of EUR 300.000 from his outstanding accounts from the Bavarian Solar AG to enable the SolarTec AG’s comeback.

The liquidator then went on to sell the SolarTec AG’s assets in 2009 in a so-called “asset deal” to a successor company. The management, Mister O., Mister H. and Mister G. of the investment company Fonds & Vermögen (F & V) have launched a second successor company, the SolCon Tec AG. The investors of those three solarfonds were able to invest in SolCon Tec AG and did so with more, considerable amounts. Despite the boom in the solar industry in the years between 2009 and 2011, both new companies had to file for bankruptcy and not only destroyed the newly brought in investments but also considerably damaged the suppliers.

For example, the Phono Solar from Nanjing has lost – according to its own statement – EUR 1.500.000 through SolCon Tec AG’s bankruptcy. But also the investment company Fonds & Vermögen (F & V) has gone bankrupt in the meantime. All companies were registered in Munich. Many investors and previous “friends of the SolarTec AG” have asked the publishers to collect the available information. They put together an information page in order to provide the full picture – which will become more detailed through further articles.